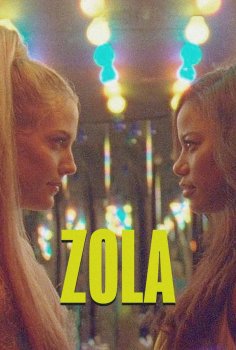 Title
Confirmed and upcoming movie titles only! Search before adding to avoid dupes.
Zola
Year
The year the movie is set to be released.
2020
Director
Janicza Bravo
Genre
Pick one or multiple movie genres.
Drama
Description
Directed by Janicza Bravo, Zola is an upcoming drama movie that stars Jason Mitchell, Colman Domingo, Nicholas Braun, Riley Keough, and Taylour Paige. The film is based on a Rolling Stone article by David Kushner. Basically, the narrative follows former sex worker and stripper who go on a road trip to Florida with a promise of dancing at a lucrative club.

Zola by A24 is the first film that is ever based on a Twitter thread. The film is based on a true story that lit up social media in 2015. Initially, James Franco was set to direct the film but fell off due to the allegations that may or may not have cost him an Oscar nomination for The Disaster Artist. Featuring murder and kidnapping, Zola has the makings of an intense, strange tale but whether it turns out to be a hit remains to be seen.
Where you watch
Downloads and Streams

Is there a Zola torrent or stream available?
No, not yet.

When will Zola officially be available?
As of now, there's no release date announced. This includes official services such as iTunes, Disney+, Blu-Ray or DVD release.