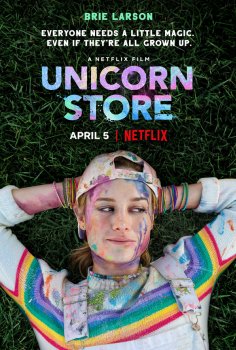 Title
Confirmed and upcoming movie titles only! Search before adding to avoid dupes.
Unicorn Store
Year
The year the movie is set to be released.
2019
Director
Brie Larson
Genre
Pick one or multiple movie genres.
Description
The directorial debut from Academy award-winning actress Brie Larson, "Unicorn Store", will premiere at the 2017 Toronto International Film Festival. The film's based on a script by Samantha McIntyre, and stars Larson alongside Samuel L. Jackson, Joan Cusack, and Bradley Whitford. It centers around Larson's character, Kit, an art school drop out who receives secretive invitations that lead her to meet salesman (Jackson) who offers her the opportunity to adopt a unicorn. There's only one catch, she must display she's matured enough to care for the majestic pet.
Where you watch
Downloads and Streams