Mr. Meeseeks   March 13, 2020
Add to list
Receive an email once the selected quality (or above) has been reported 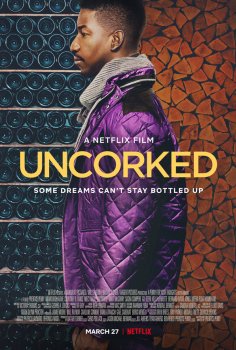 Title
Confirmed and upcoming movie titles only! Search before adding to avoid dupes.
Uncorked
Year
The year the movie is set to be released.
2020
Director
Prentice Penny
Genre
Pick one or multiple movie genres.
Drama
Digital release
Official digital release date on services such as iTunes, Amazon, Netflix. It's the first known release date, without any country restriction. So if it's out on iTunes Russia first, this would be the digital release date.
March 27, 2020
Description
A Netflix film which features Elijah, a guy who wants to become a wine sommelier. And while it might sound bland, the film has gotten some very nice reviews according to Rotten Tomatoes. And you can actually buy all of the wines in the film, and doing a drink-along event.

Can I download or stream Uncorked? Yes. Reports of pirated torrents and streams are available below.
When will Uncorked be available on digital platforms like iTunes or Amazon? It's set for a March 27, 2020 release. This likely includes iTunes and Amazon unless it is an exclusive Netflix, or similar, release. Physical versions on Blu-Ray or DVD will likely follow.