Mr. Meeseeks   February 08, 2018
Add to list
Receive an email once the selected quality (or above) has been reported 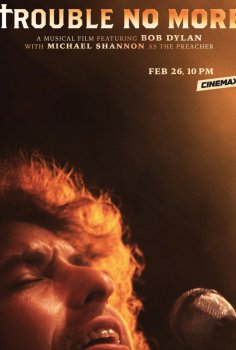 Title
Confirmed and upcoming movie titles only! Search before adding to avoid dupes.
Trouble No More
Year
The year the movie is set to be released.
2018
Director
Jennifer Lebeau
Genre
Pick one or multiple movie genres.
Cinema release
First cinema release date in any country.
February 26, 2018
Description
“Trouble No More” is a new documentary about the legendary musician Bob Dylan, and a brief period in his career where he focused on gospel music. The film, directed by Jennifer Lebeau, features digitally remastered footage from live concerts during his 1980 tour. It premiered late last year at the New York Film Festival, and will begin streaming later this month through Cinemax.
Where you watch
Downloads and Streams

Is there a Trouble No More torrent or stream available?
No, not yet.

When will Trouble No More officially be available?
As of now, there's no release date announced. This includes official services such as iTunes, Disney+, Blu-Ray or DVD release.