Mr. Meeseeks   January 19, 2020
Add to list
Receive an email once the selected quality (or above) has been reported 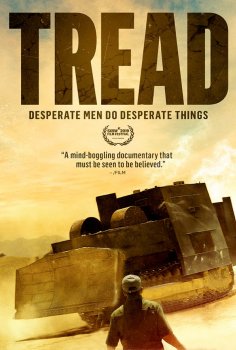 Title
Confirmed and upcoming movie titles only! Search before adding to avoid dupes.
Tread
Year
The year the movie is set to be released.
2020
Director
Paul Solet
Genre
Pick one or multiple movie genres.
Documentary
Digital release
Official digital release date on services such as iTunes, Amazon, Netflix. It's the first known release date, without any country restriction. So if it's out on iTunes Russia first, this would be the digital release date.
February 28, 2020
Description
Paul Solet’s directorial debut Tread documents the incredible true story of Marvin Heemeyer’s rampage that occurred in the small Colorado town of Granby. Through re-enactments and actual footage, the documentary shows Marven’s taped interviews and confessions with Granby locals which reveal the full story for the very first time. You will have a better understanding of the man behind the armored vehicle once you learn about what led up to the events of June 4, 2004.

Tread takes the viewers back to the story’s beginning. Back when everything was well in Marvin’s world. First, the documentary introduces you to a regular, nice, nothing out of the ordinary man and then his dark obsession of having his void heard is shown. After ten years of being ignored, Marvin finally resorts to action in order to make sure that he is heard. Tread is basically a comprehensive tale of a man’s dissolution into rage.

Hopefully this gets picked up properly by a streaming service like Netflix.
Where you watch
Downloads and Streams

Is Tread available online?
No. It has yet to be reported as either a pirated torrent or pirated stream.

When will Tread officially be available?
It's set for a February 28, 2020 release. Illegal downloads, torrents and streams will be reported on this page. Its official release through streaming services, such as Netflix, will also be reported.