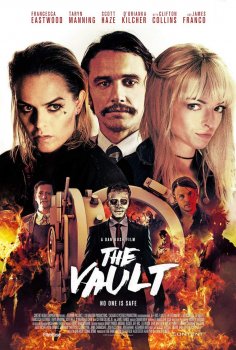 Title
Confirmed and upcoming movie titles only! Search before adding to avoid dupes.
The Vault
Year
The year the movie is set to be released.
2017
Director
Dan Bush
Genre
Pick one or multiple movie genres.
Cinema release
First cinema release date in any country.
September 01, 2017
Description
The fourth feature film from American film director Dan Bush, "The Vault", was released on September 1st, 2017. The crime thriller centers around two sisters who must rob a bank in order to save their brother, only to find out the bank is nothing like what they expected. It stars Taryn Manning, Francesca Eastwood, and James Franco.
Where you watch
Downloads and Streams

Is there a The Vault torrent? Yes. Reports are available below.
When will The Vault be available on digital platforms like iTunes, Amazon or Apple+? As of now, there's no release date announced. This includes iTunes, Amazon, Blu-Ray and DVD.