Mojib   October 06, 2017
Add to list
Receive an email once the selected quality (or above) has been reported 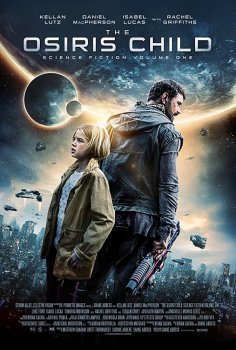 Title
Confirmed and upcoming movie titles only! Search before adding to avoid dupes.
The Osiris Child: Science Fiction Volume One
Year
The year the movie is set to be released.
2017
Director
Shane Abbess
Genre
Pick one or multiple movie genres.
Description
The Osiris Child: Science Fiction Volume One
Twenty-years ago, you could walk into a video store and pick out a certain kind of low-budget science fiction movie. Movies that looked the same, but if one had lasers, starships and a cyborg suit in it, it was probably worth watching. Big budget visual effects have all but killed that level of film, but director Shane Abbess hopes to remind you of it with The Osiris Child.


The Osiris Child – let's ignore everything after the colon – is Abbess' quick follow-up to 2015's Infini, the story of a space station harboring unknown intruders. This time he gets outside, with locations around (and under) Coober Pedy creating a world colonized by one of Earth's corporations. The planet's prison, already a source of forced labor, also houses an experimental program that, not entirely surprisingly, goes haywire, releasing murderous genetically modified creatures known as Raggeds.
The film debuted last year at Fantastic Fest (where it screened under the fabulously campy title Science Fiction Volume One: The Osiris Child), and while I missed it there, I heard some pretty solid word of mouth for the Australian pic, with a particular amount of praise paid to the ambition, scope, and general fun-factor the action thriller has to offer. The trailer also has a fun throwback vibe that feels at home with the action-fuelled sci-fi films that dominated the 80s and 90s.
The Osiris Child also stars Isabel Lucas, Luke Ford, Rachel Griffiths, Teagan Croft and arrives exclusively on DIRECTV September 7 and in theaters and on demand October 6, 2017. Check out the trailer below.
The movie, with its uniform American accents for the international market, is constantly torn between the generic and the original. Everything from an eerily neutral artificial intelligence of 2001: A Space Odyssey to the charging outback monster of Razorback is repurposed here, but throughout the film the production design is richly detailed and Abbess crafts concise images.
There is some geek-pretty digital spaceship work, but the problem is the Raggeds. Physically constructed and in some cases operated by puppeteers, they have a scaly bulk that's suggestively great in close-up but incapable of conveying movement; the killing machines mostly shuffle. Abbess does his best to shoot around this, but it eventually tells.
The action sequences are one of Osiris Child’s standout accomplishments, with a number of the scenes really hitting above their weight. The standout for me had to be the space fighter dogfight in the upper atmosphere of the planet, it was well structured and implemented, and was cut together to increase the intensity. Another thing I liked with the action was that in the brawls they filmed it in a way that made the punches feel like they had weight behind them, fists make a connection, and gave you the feeling that this punch hurt, it was also edited in a way where the action slowed well and you could tell what was going on at any one time. While I did like the action, they did overuse slow-mo a little too much and some of the inserts were a bit weird and unnecessary.
Where you watch
Downloads and Streams