The One And Only Ivan

Mr. Meeseeks   July 11, 2020
Add to list
Receive an email once the selected quality (or above) has been reported 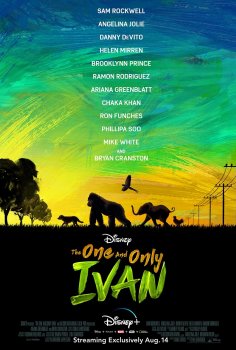 Title
Confirmed and upcoming movie titles only! Search before adding to avoid dupes.
The One And Only Ivan
Year
The year the movie is set to be released.
2020
Director
Thea Sharrock
Genre
Pick one or multiple movie genres.
Fantasy
Digital release
Official digital release date on services such as iTunes, Amazon, Netflix. It's the first known release date, without any country restriction. So if it's out on iTunes Russia first, this would be the digital release date.
August 14, 2020
Description
Starring Bryan Cranston, Ramón Rodríguez, Ariana Greenblatt, Indira Varma, and Eleanor Matsuura. Featuring the voices of Sam Rockwell, Angelina Jolie, Brooklynn Prince, Danny DeVito, Helen Mirren, Chaka Khan, Ron Funches, Phillipa Soo, and Mike White.
Where you watch
Downloads and Streams

Is The One And Only Ivan available online?
No. It has yet to be reported as either a pirated torrent or pirated stream.

When will The One And Only Ivan officially be available?
It's set for a August 14, 2020 release. Illegal downloads and streams will be reported on this page. Its official release through streaming services, such as Netflix, will also be reported. See details regarding any Blu-Ray and DVD release dates in the comment section.

The One and Only Ivan | Official Trailer | Disney+