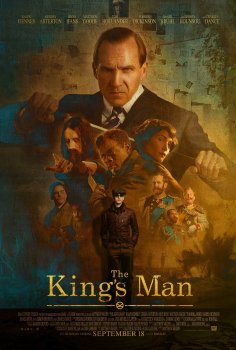 Title
Confirmed and upcoming movie titles only! Search before adding to avoid dupes.
The King's Man
Year
The year the movie is set to be released.
2021
Director
Matthew Vaughn
Genre
Pick one or multiple movie genres.
Cinema release
First cinema release date in any country.
February 26, 2021
Description
Directed by Matthew Vaughn, The King’s Man is a movie about war, nobility, and secrets. It is a part of the Kingsman franchise. However, rather than picking up where The Golden Circle left off, this film serves as a prequel and an origin story for the intelligence agency.

The story of The King’s Man is set around the events surrounding World War I as criminal masterminds, megalomaniacs, and tyrants devise new ways to decimate humanity. Conard, a newly hired spy at Kingsman soon finds himself racing against time to stop the criminal masterminds from devising a plan that would threaten the life of millions. The King’s Man boasts an impressive cast that includes Ralph Fiennes, Stanley Tucci, Charles Dance, Harris Dickinson, Daniel Brühl, and Gemma Arterton among others. The release date of the film was pushed back from February 14, 2020 to September 18, 2020.
Where you watch
Downloads and Streams

Is there a The King's Man torrent or stream available?
No, not yet.

When will The King's Man officially be available?
As of now, there's no release date announced. This includes official services such as iTunes, Disney+, Blu-Ray or DVD release.