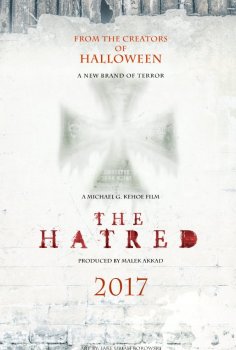 Title
Confirmed and upcoming movie titles only! Search before adding to avoid dupes.
The Hatred
Year
The year the movie is set to be released.
2017
Director
Michael Kehoe
Genre
Pick one or multiple movie genres.
Horror
Cinema release
First cinema release date in any country.
September 12, 2017
Description
"The Hatred" is a horror film from writer/director Michael Kehoe, which will be released on September 12th, 2017. The plot follows a babysitter who invite her three friends to visit the house she'll be staying at for the weekend.
Where you watch
Downloads and Streams