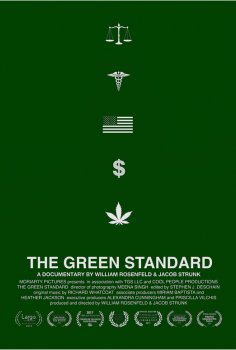 Title
Confirmed and upcoming movie titles only! Search before adding to avoid dupes.
The Green Standard
Year
The year the movie is set to be released.
2018
Director
William Rosenfeld, & Jacob Strunk
Genre
Pick one or multiple movie genres.
Documentary
Cinema release
First cinema release date in any country.
April 17, 2018
Description
In the United States of America, the drug enforcement agency has marijuana classified as a narcotic equally dangerous as substances like heroin, and LSD, and more harmful than Methamphetamine, cocaine, and fentanyl. For decades this has created a standard for demonizing, and often fiercely prosecuting users and distributors. “The Green Standard” is a film that exposes every side of the debate which has lasted throughout generations. Whether it’s those who make their living fighting to maintain the current federal prohibition, or families who become refugees for their children to receive the medicine they need to survive, all sides receive exposure.
Where you watch
Downloads and Streams

Is The Green Standard available as a pirated stream or pirated download?
No, not yet.

When will The Green Standard officially be available?
As of now, there's no release data announced. This includes official services such as iTunes, Disney+, Blu-Ray or DVD release.