Mr. Meeseeks   October 29, 2019
Add to list
Receive an email once the selected quality (or above) has been reported 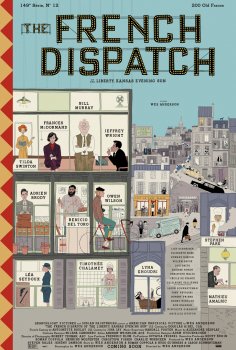 Title
Confirmed and upcoming movie titles only! Search before adding to avoid dupes.
The French Dispatch
Year
The year the movie is set to be released.
2021
Director
Wes Anderson
Genre
Pick one or multiple movie genres.
Drama
Cinema release
First cinema release date in any country.
October 22, 2021
Description
Wes Anderson's highly anticipated tenth feature film, "The French Dispatch" will see him once again return to live-action, after his second animation "Isle of Dogs" released in 2018. The plot centers around an American newspaper in fictionalized 20th century France, and is based on an original screenplay by Anderson himself. The publication intends to celebrate their three most impactful stories, each of which is depicted in the film. Story #1 "The Concrete Masterpiece", is about an art dealer (Adrien Brody) interested in purchasing a painting made by a prisoner (Benicio Del Toro). Story #2 "Revisions to a Manifesto", is about a journalist (Frances McDormand) covering a story based on the real-life student protests in France from May 1968, Timothée Chalamet and Lyna Khoudri portray the students. Story #3 "The Private Dining Room of The Police Commissioner", documents a dinner party which descends into chaos when the child of the Police Commissioner is kidnapped and held for ransom, featuring Jeffrey Wright and Mathieu Amalric.

The complete title of the film is "The French Dispatch of the Liberty, Kansas Evening Sun". With cinematography by Robert Yeoman, and music by Alexandre Desplat.
Where you watch
Downloads and Streams