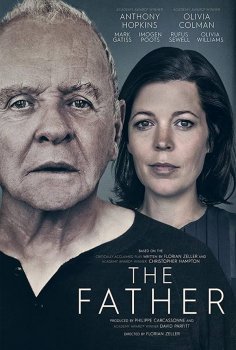 Title
Confirmed and upcoming movie titles only! Search before adding to avoid dupes.
The Father
Year
The year the movie is set to be released.
2020
Director
Florian Zeller
Genre
Pick one or multiple movie genres.
Drama
Cinema release
First cinema release date in any country.
December 18, 2020
Description
Debut film of Florian Zeller depicts a story of an older man refusing all assistance from his daughter Anne. When the help becomes necessary, father begins to doubt his reality. Two names attached to the project - of Academy Award winners - assure fantastic performances - the father is played by Anthony Hopkins, the daughter - by Olivia Colman. Rufus Sewell, Imogen Poots, Mark Gatiss and Olivia Williams co-star.

Is The Father available as a pirated stream or pirated download?
No, not yet.

When will The Father officially be available?
As of now, there's no release data announced. This includes official services such as iTunes, Disney+, Blu-Ray or DVD release.