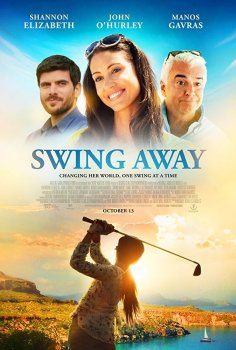 Title
Confirmed and upcoming movie titles only! Search before adding to avoid dupes.
Swing Away
Year
The year the movie is set to be released.
2017
Director
Michael A. Nickles
Genre
Pick one or multiple movie genres.
Description
“Swing Away”, a film about self-discovery and one woman’s love affair with Greece, will be released in November 2016, limited release.

The film focuses on a Greek-American golfer named Zoe (Shannon Elizabeth, who you might remember from American Pie), who has become disillusioned with her life in the US following a very public meltdown and decides to travel back to Greece to visit her family and figure out a new direction. Her decision is inspired by famous Greek writer Nikos Kazantzakis, whose philosophy of “hope for nothing, fear nothing” is infused throughout the movie.
Swing Away is directed by Michael A. Nickles (This is Not a Film) who you may remember as Jim Morrison from Wayne’s World 2 (1993). Zoe Papadopoulos is played by Shannon Elizabeth (Love Actually, Thir13en Ghosts), well known for her portrayal of Nadia in American Pie (1999). The film also stars actor John O’Hurley, a well-known voice and television actor from things such as Santa Barbra (1990-1991), Frasier (1993-2004), Baywatch (1989-2001), General Hospital (1963-), Phineas and Ferb (2007-2015) and Seinfeld (1989-1998).
Set in the lush tranquility which Greece is known to offer, “Swing Away” is a sweetly nostalgic look at a young woman, Zoe, and her visit to her ancestors’ town after a temporary suspension from her golf career. This escape from her current pressures turns into something of a musing about the idyllic town as she becomes involved with the community and imbues her own love of golf into the heart of the town. Underlying is the film’s sense of hospitality, how people combine their own passions and hopes together to make a culture of their own.
The final act of the story involves a competition for ownership of the new gold course Zoe has helped implement, settled by golfing. Money and power is on the side of the opponent. The town must become one supportive team in order to call the land their own.
“Swing Away” is one of the few non-Greek language movies to be shot, edited, and post-produced within Greece, partly in order to more effectively tell the story, in which the country plays such a central part, and partly as a decision of the filmmakers to support the Greek creative community. The film has already picked up praise and accolades, especially when it premiered at the Geena Davis-founded Bentonville Film Festival in May 2016.

Because of the language and use of alcohol, “Swing Away” is awarded the Dove Seal of Approval for Ages 18-Plus. All the same, it is a transporting film not only meant for fans of sports movies. In fact, sports movies are never usually just about the sport, and “Swing Away” follows that tradition by becoming so much more.

“Swing Away touchingly tells the story of golf, its beauty and its challenge. To showcase the celebrity of an LPGA star, this motion picture is another affirmation of the growing popularity of women’s golf around the world. Buffalo Brand Invigoration Group joins other leading golf brands and sponsors including Antigua, Volvik and Acer who have pledged support of this fun and inspiring film.”
Where you watch
Downloads and Streams