Dafne   August 24, 2017
Add to list
Receive an email once the selected quality (or above) has been reported 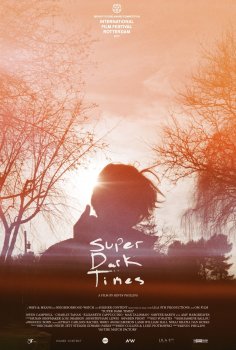 Title
Confirmed and upcoming movie titles only! Search before adding to avoid dupes.
Super Dark Times
Year
The year the movie is set to be released.
2017
Director
Kevin Phillips
Genre
Pick one or multiple movie genres.
Cinema release
First cinema release date in any country.
September 29, 2017
Description
One of the most anticipated indie digital download and stream, this is the movie Super Dark Times.

For a brief but blissful stretch, Super Dark Times comes closer than most films to capturing the private, painfully uncool world of teenage boys: the afternoons of eventfully uneventful downtime, burnt away on mild transgressions and conversational one-upmanship. Two gawky high schoolers, Zach (Owen Campbell) and Josh (Charlie Tahan), bike around their Upstate New York suburb, dodging the upperclassmen bullies, shooting the shit about comic books and girls, generally basking in the everyday freedoms of unsupervised adolescence. Profanity flies freely, because it can. Vulnerabilities are casually revealed beneath the play-acting bluster of boys being boys pretending to be men. Next to these ordinary teens, the terrorized pipsqueaks of this month’s hit Stephen King adaptation seem downright artificial, like some clueless studio exec’s conception of how kids talk and act.

Blurring genre lines throughout, Super Dark Times marks a confidently audacious and impeccably assembled feature debut for director Kevin Phillips. In its adult depiction of innocence corrupted, Phillips’ midnight-dark film has shades of everything from Stand By Me to Donnie Darko and Stranger Things. Yet Phillips’ masterful command of mood, cinematographer Eli Born’s stunning use of wide-screen photography, a few unsettlingly horror-movie-like dream sequences, and the cast’s excellent performances all combine to elevate Super Dark Times above pastiche and into uncompromisingly bold filmmaking.

For anyone who grew up in the Northeastern United States during the late '80s/early '90s, Super Dark Times is going to feel like coming home. The wood paneled basements and boxy computers, displaying crude screen savers that bounce off the corners like ping pong balls, are signifiers of what era we’re currently existing within. There aren’t any showy Thing posters, and the needle drops aren’t necessarily culled from the exact year in which these tragic events take place (though a hyper-specific Bill Clinton speech alerts us that it's ’95). The lo-fi tech (cassettes, a Discman, cable descramblers), and kids jacking off to Jamie Lee Curtis’ True Lies striptease allow you to slide right into this epoch, (un)comfortably riding your own Schwinn down these manicured streets, sneaking cigarettes in the park and shouting “penis!” like a brat in front of your crush’s house.

The performances from the film’s young cast members are uniformly excellent, including Owen Campbell as Zach and Charlie Tahan as Josh. But the direction from Mr. Phillips is what makes “Super Dark Times” unusual. In the movie’s scenes of violence, in particular, what we hear complicates what we see, as the impact of blunt physical trauma mixes with the film’s score to suggest the psychic magnitude of accidental violence. While another movie might have leaned harder on ripped-from-the-headlines prurience, “Super Dark Times” instead aims to become a more elusive pleasure — a simple story, well told.
Where you watch
Downloads and Streams