Sing Me A Song 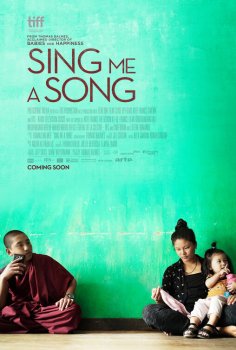 Title
Confirmed and upcoming movie titles only! Search before adding to avoid dupes.
Sing Me A Song
Year
The year the movie is set to be released.
2020
Director
Thomas Balmès
Genre
Pick one or multiple movie genres.
Documentary
Description
"Sing Me A Song" premiered at the 2019 Toronto International Film Festival. It's about a teenage monk in the small nation of Bhutan who forms a distant relationship using his smart phone.
Where you watch
Downloads and Streams

Is there a Sing Me A Song torrent or stream available?
No, not yet.

When will Sing Me A Song officially be available?
As of now, there's no release date announced. This includes official services such as iTunes, Disney+, Blu-Ray or DVD release.