See How They Run

benyamin   July 31, 2021
Add to list
Receive an email once the selected quality (or above) has been reported 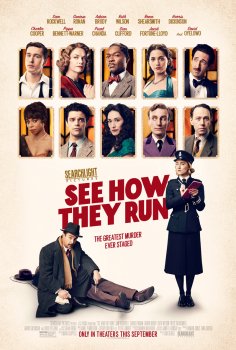 Title
Confirmed and upcoming movie titles only! Search before adding to avoid dupes.
See How They Run
Year
The year the movie is set to be released.
2022
Director
Tom George
Genre
Pick one or multiple movie genres.
Mystery
Cinema release
First cinema release date in any country.
September 30, 2022
Description
See How They Run is a movie about a desperate film producer trying to turn a popular play into a film, but members of the production keep getting murdered by a mystery killer. Starring Sam Rockwell, Saoirse Ronan, Adrien Brody, David Oyelowo, Ruth Wilson, Harris Dickinson, Shirley Henderson, Sian Clifford, Jacob Fortune-Lloyd, Reece Shearsmith, and Charlie Cooper.
Where you watch
Downloads and Streams

Is there a See How They Run torrent or stream available?
No, not yet.

When will See How They Run officially be available?
As of now, there's no release date announced. This includes official services such as iTunes, Disney+, Blu-Ray or DVD release.