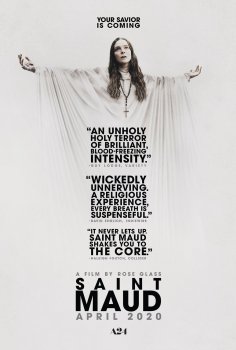 Set in an English coastal town, the film tells the story of Amanda and Maud. Maud is charged with taking care of Amanda who is a retired dancer suffering from cancer. Apart from being mildly infatuated and intrigued with Amanda, Maud is also devoted to God. Amanda on the other hand, doesn’t have the same beliefs. But she finds Maud amusing. What begins as a romance soon transforms into something more macabre and mesmerizing. The structure of Saint Maud is what makes it so effective. The movie is patient, chilling, cerebral, and introspective.
Where you watch
Downloads and Streams

Is Saint Maud available as a pirated stream or pirated download?
No, not yet.

When will Saint Maud officially be available?
As of now, there's no release data announced. This includes official services such as iTunes, Disney+, Blu-Ray or DVD release.