Mr. Meeseeks   February 26, 2020
Add to list
Receive an email once the selected quality (or above) has been reported 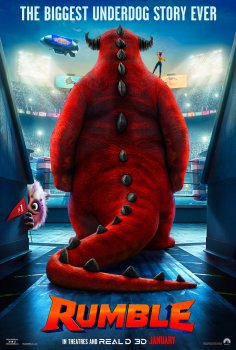 Title
Confirmed and upcoming movie titles only! Search before adding to avoid dupes.
Rumble
Year
The year the movie is set to be released.
2021
Director
Hamish Grieve
Genre
Pick one or multiple movie genres.
Cinema release
First cinema release date in any country.
January 29, 2021
Description
"Rumble" is a new computer-animated film from Paramount, which takes place in a fantasy world of monsters. The story is heavily influenced by professional wrestling, following a teenage protagonist with dreams of becoming the next champion of "Monster Wrestling". The screenplay was penned by Etan Cohen, and Matt Lieberman. The voice cast stars Geraldine Viswanathan, Terry Crews, Will Arnett, and real-life wrestling superstars Rebecca Quin (Becky Lynch), and Joseph Anoa'I (Roman Reigns).
Where you watch
Downloads and Streams

Is there a Rumble torrent or stream available?
No, not yet.

When will Rumble officially be available?
As of now, there's no release date announced. This includes official services such as iTunes, Disney+, Blu-Ray or DVD release.