Bannister   September 29, 2017
Add to list
Receive an email once the selected quality (or above) has been reported 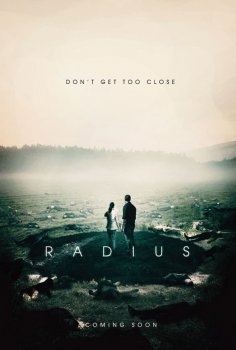 One of the serious advantages to smaller, indie speculative-fiction movies is that you generally don’t know what you’re getting up front. In today’s anticipation culture, websites often drool over every possible detail and reveal about the bigger nerd-friendly properties. It’s easy to walk into a big movie feeling like you already know all the major beats, because they’ve been discussed to death online already in “Everything we know about this movie” articles, and “Let’s pick apart this trailer frame by frame” videos.

Liam (Diego Klattenhoff) wakes from a car crash with no memory of who he is. As he makes his way into town to look for help, he finds only dead bodies, all with strange pale eyes. Liam’s first assessment is that a virus is present in the air, but he soon discovers the horrible truth: anyone who comes within a 50-foot radius of him dies instantly.

The opening stretches of the film recall Village of the Damned or The Quiet Earth as Liam walks through the depopulated countryside and comes upon a small town populated by white-eyed corpses. Birds drop from the sky whenever he passes. With the arrival of Jane, several interlocking puzzles are unravelled; the third act delivering some surprising answers and also getting to the thematic meat of living as a blank slate with a deadly condition that might be inflicted in return for past sins.

Radius is certainly rough around the edges. It’s the kind of film where the limited budget and tight shooting schedule show through, and the acting can be a little erratic. Klattenhoff and Sullivan are at their strongest during the film’s faster-paced action sequences, where they bring across the desperation of their situation. But they’re both guilty of occasionally falling into a flat, strident affect that’s more suitable to a TV crime drama than a theatrical film. Some of the eventual reveals seem melodramatic, even soap operatic. The film’s final moments are rushed, and the ending is startlingly abrupt, with no time for reflection.
In spite of the body count and some grim, heart-in-mouth action situations, it’s free of sex, gore, and all sorts of other stuff that merits content warnings these days. But kids aren’t likely to get much out of it. Call it PG-13 just to keep yelling children out of the theater.

At Fantastic Fest, the filmmakers said Radius will have a limited theatrical release on November 9th, and will appear on streaming services and Netflix on the same day.
Where you watch
Downloads and Streams

Is there a Radius torrent? Yes. Reports are available below.
When will Radius be available on digital platforms like iTunes, Amazon or Apple+? As of now, there's no release date announced. This includes iTunes, Amazon, Blu-Ray and DVD.