Mr. Meeseeks   April 13, 2018
Add to list
Receive an email once the selected quality (or above) has been reported 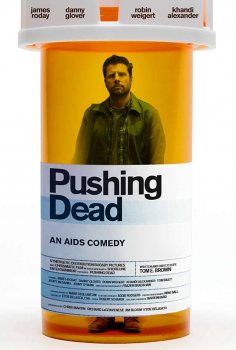 Title
Confirmed and upcoming movie titles only! Search before adding to avoid dupes.
Pushing Dead
Year
The year the movie is set to be released.
2017
Director
Tom E. Brown
Genre
Pick one or multiple movie genres.
Comedy
Cinema release
First cinema release date in any country.
November 09, 2017
Description
James Roday stars as a struggling writer who’s lived the last two decades of his life HIV positive. After depositing a $100 check he got on his birthday, he’s dropped from his insurance providers for making too much money. He’s faced with two options, come up with thousands of dollars monthly to afford the AIDS medication, or fight for his life against an entire nation that would rather see him die than offer him health care. The supporting cast features Robin Weigert, Danny Glover, Khandi Alexander, and Tom Riley.
Where you watch
Downloads and Streams

Is Pushing Dead available as a pirated stream or pirated download?
No, not yet.

When will Pushing Dead officially be available?
As of now, there's no release data announced. This includes official services such as iTunes, Disney+, Blu-Ray or DVD release.