Mr. Meeseeks   February 24, 2018
Add to list
Receive an email once the selected quality (or above) has been reported 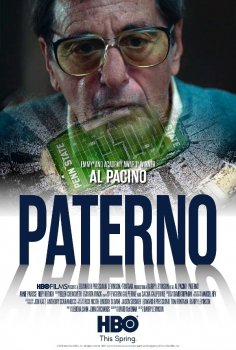 Title
Confirmed and upcoming movie titles only! Search before adding to avoid dupes.
Paterno
Year
The year the movie is set to be released.
2018
Director
Barry Levinson
Genre
Pick one or multiple movie genres.
Cinema release
First cinema release date in any country.
April 07, 2018
Description
This April, HBO will begin streaming their new film from director Barry Levinson about the real-life controversy surrounding American football coach Joe Paterno. Al Pacino stars in the titular role, as the head coach of Penn State College who broke the record for most wins. However, his reputation would go up in smoke, as one of the assistants hired by him, Jerry Sandusky, had been sexually abusing children for over four decades, employed by the school the entire time. Paterno eventually became aware of these horrific events, and was complicit in a conspiracy of silence spearheaded by his superiors at the university. Despite this serial rapist being caught in the act by a co-worker while on campus, the school president Graham Spanier chose not to inform law enforcement and advised his employees to do the same. Sandusky would continue these atrocities until he was convicted in 2012, forty-three years after he was first hired by the school. He maintained his on-campus office until November of 2011, when it was first reported that this monster had been indicted on fifty-two counts of child molestation.
Where you watch
Downloads and Streams

Is there a Paterno torrent? Yes. Reports are available below.
When will Paterno be available on digital platforms like iTunes, Amazon or Apple+? As of now, there's no release date announced. This includes iTunes, Amazon, Blu-Ray and DVD.