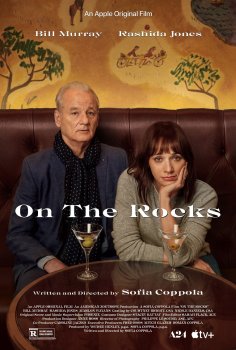 Title
Confirmed and upcoming movie titles only! Search before adding to avoid dupes.
On the Rocks
Year
The year the movie is set to be released.
2020
Director
Sofia Coppola
Genre
Pick one or multiple movie genres.
Comedy
Description
On the Rocks is Sofia Coppola’s latest film that stars Bill Murray, Jenny Slate, Rashida Jones, Jessica Henwick, and Marlon Wayans. The movie follows the story of a young mother who reconnects with her estranged father in New York City.

The father in the synopsis is described as “larger-than-life playboy” which is a perfect role for Bill Murray. Sofia Coppola and Bill Murray have worked together before e.g. Lost in Translation and A Very Murray Christmas and On the Rocks is the latest project bringing the two together. It is to be one of the first of many films produced in a collaboration between A24 and Apple. The release date has been announced for October of 2020.
Where you watch
Downloads and Streams

Is On the Rocks available as a pirated stream or pirated download?
No, not yet.

When will On the Rocks officially be available?
As of now, there's no release data announced. This includes official services such as iTunes, Disney+, Blu-Ray or DVD release.