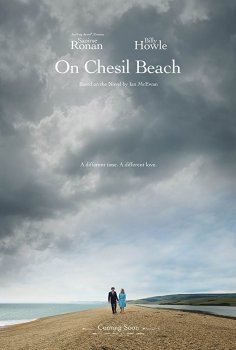 Title
Confirmed and upcoming movie titles only! Search before adding to avoid dupes.
On Chesil Beach
Year
The year the movie is set to be released.
2018
Director
Dominic Cooke
Genre
Pick one or multiple movie genres.
Romance
Cinema release
First cinema release date in any country.
January 19, 2018
Description
A novel of remarkable depth and poignancy from one of the most acclaimed writers of our time.

The overwhelming English sadness of Ian McEwan’s novella On Chesil Beach has been transferred to the movie screen, adapted by the author and directed with scrupulous sensitivity and care by Dominic Cooke, known for his stage work and making his feature film debut here. It is a tender and valuable film, well acted, with a shrewd eye for how naive you can be in your early 20s, how impatient, how pompous, how tragicomically un-self-aware.

McEwan wrote the screenplay and first-timer Dominic Cooke (TV’s The Hollow Crown) directed this feature film adaptation, which is from two of the producers of Todd Haynes’ Carol, Elizabeth Karlsen and Stephen Woolley. The story is set in 1962 and focuses tightly on the dreamy-eyed newlyweds Edward and Florence, who qickly mature into grown-ups with a shattering adult argument following an unfortunate attempt at consummation. The book’s remarkable opening line is: “They were young, educated, and both virgins on this, their wedding night, and they lived in a time when conversation about sexual difficulties was plainly impossible.”
Florence (Saoirse Ronan) and Edward (Billy Howle) is a young couple on their honeymoon at the English seaside. It is 1962, and overcast. Florence is a disciplined violinist, raised in a cold vise of middle-class repression. Flashbacks show her mother (Emily Watson) crushing all impulse with propriety. Edward offers Florence some promise of freedom. He was raised in the countryside in a more volatile family, and found liberation in literature and ideas. The two arrive at a Chesil Beach guest house in love and ready to begin their life together, but hopelessly ill-eqipped for their first night.”

The novel’s present comprises no more than twelve hours in which Edward and Florence eat a heavy, unappealing dinner; attempt unsuccessfully to consummate their marriage; argue on the beach, where he follows her after the failed attempt at sexual intercourse; and then separate. Interspersed with passages of the present, in which the narrator switches back and forth from the consciousness of first one and then the other newlywed, are flashbacks to the past year, in which the couple met, fell in love, and married. Both are bright, well-educated young people with promising futures. Florence is a gifted violinist who aspires to lead her string qartet into fame and fortune. Edward completed his studies with a “first,” or “A,” in history and aspires to write short biographies of semi famous people. They are very much in love.

However the two are both virgins and the social code of the early 1960s has not prepared them for the task of consummating their vows. In alternating points of view and through flashback the story of how they met and fell in love is revealed.

"On Chesil Beach" is a romance film starring Saoirse Ronan, which will premiere at the 2017 Toronto International Film Festival, and will be released to cinemas in the United Kingdom on January 19th, 2018. It will serve as the directorial debut from Dominic Cooke, the supporting cast features Billy Howle, Emily Watson, Anne-Marie Duff, Samuel West, and Adrian Scarborough.
Where you watch
Downloads and Streams