No Time To Die

Mr. Meeseeks   February 12, 2018
Add to list
Receive an email once the selected quality (or above) has been reported 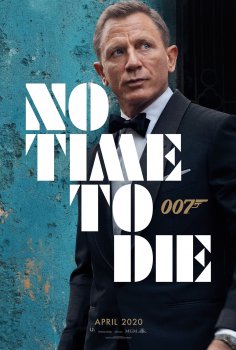 Title
Confirmed and upcoming movie titles only! Search before adding to avoid dupes.
No Time To Die
Year
The year the movie is set to be released.
2021
Director
Cary Joji Fukunaga
Genre
Pick one or multiple movie genres.
Cinema release
First cinema release date in any country.
October 08, 2021
Description
The twenty-fifth James Bond film "No Time To Die" will be the first sequel since “Spectre”, the most expensive movie ever made. Daniel Craig will reprise the iconic role, alongside returning stars Ralph Fiennes, Naomie Harris, Ben Whishaw, Rory Kinnear, Jeffrey Wright, and Léa Seydoux. While actors Rami Malek, Ana de Armas, Lashana Lynch, David Dencik, Dali Benssalah, and Billy Magnussen will be making their first appearances in the Bond franchise.

Daniel Craig is back in action as Agent 007 in the 25th bond movie No Time to Die. It is being said that it will be Craig’s final movie as Bond and according to producers, he will go out with a bang.

Directed by Cary Joji Fukunaga, No Time to Die sees James Bond’s peaceful retirement from active service which gets interrupted when Felix Leiter, his good friend from CIA, tracks Agent 007 down in Jamaica and asks for his help to rescue a kidnapped scientist. The main villain of the film is called Safin and he is played by Oscar winner Rami Malek. Lashana Lynch, Ana de Armas, Christoph Waltz, Ben Whishaw, Lea Seydoux, Rory Kinnear, Naomie Harris, and Ralph Fiennes also co-star.

English director Danny Boyle had originally signed on to the film, but departed due to creative differences, Cary Joji Fukunaga would take over the project. The screenplay was written by the team of Fukunaga, Scott Z. Burns, and Phoebe Waller-Bridge.

Formerly known as "Bond 25"
Where you watch
Downloads and Streams

NO TIME TO DIE Trailer