Ramona Flowers   October 04, 2017
Add to list
Receive an email once the selected quality (or above) has been reported 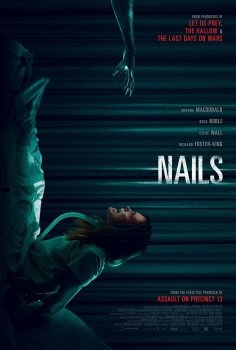 TITLE
Confirmed and upcoming movie titles only! Search before adding to avoid dupes.
Nails
YEAR
The year the movie is set to be released.
2017
DIRECTOR
Tom Abrams
GENRE
Pick one or multiple movie genres.
Horror
CINEMA
First cinema release date in any country.
June 16, 2017
DESCRIPTION
Tom Abrams horror flick “Nails” stars Shauna Macdonald, who’s recovering in a hospital room after an accident when she’s disturbed by a paranormal entity. It was released to theaters in Ireland in June of 2017, with a second release planned for American theaters in November.
WHERE YOU WATCH
Downloads and Streams

Is Nails available online? Yes. Reports of pirated torrents and streams are available below.
When will Nails be available on digital platforms like iTunes, Amazon or Apple+? As of now, there's no release date announced. This includes iTunes, Amazon, Blu-Ray and DVD.