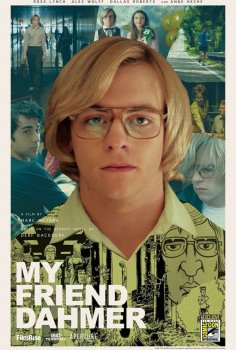 Title
Confirmed and upcoming movie titles only! Search before adding to avoid dupes.
My Friend Dahmer
Year
The year the movie is set to be released.
2017
Director
Marc Meyers
Genre
Pick one or multiple movie genres.
Cinema release
First cinema release date in any country.
November 03, 2017
Description
The fourth movie written and directed by American filmmaker Marc Meyers, "My Friend Dahmer", is based on the 2012 graphic novel of the same name, which was written by cartoonist John Backderf whom was friends with Jeffrey Dahmer in high school before he became a serial killer. Dahmer is played by former Disney Channel child star Ross Lynch, and Backderf by former Nickelodeon child star Alex Wolff.
Where you watch
Downloads and Streams