Mr. Meeseeks   January 30, 2018
Add to list
Receive an email once the selected quality (or above) has been reported 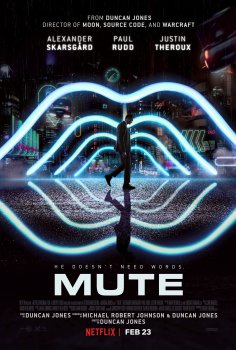 Title
Confirmed and upcoming movie titles only! Search before adding to avoid dupes.
Mute
Year
The year the movie is set to be released.
2018
Director
Duncan Jones
Genre
Pick one or multiple movie genres.
Cinema release
First cinema release date in any country.
February 23, 2018
Description
The new Netflix film “Mute” from Duncan Jones will be released at the end of February. He describes it as a “spiritual sequel” to a movie he made almost a decade ago, “Moon”. Alexander Skarsgård stars as a mute bartender in search of his missing girlfriend in Germany, forty years in the future. Paul Rudd, and Justin Theroux co-star, based on a script Jones co-wrote with Michael Robert Johnson.
Where you watch
Downloads and Streams

Is there a Mute torrent? Yes. Reports are available below.
When will Mute be available on digital platforms like iTunes, Amazon or Apple+? As of now, there's no release date announced. This includes iTunes, Amazon, Blu-Ray and DVD.