Mr. Meeseeks   April 30, 2018
Add to list
Receive an email once the selected quality (or above) has been reported 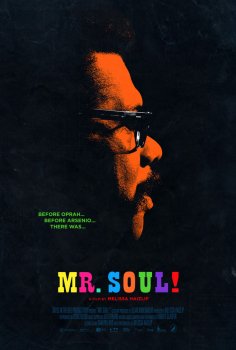 Title
Confirmed and upcoming movie titles only! Search before adding to avoid dupes.
Mr. SOUL!
Year
The year the movie is set to be released.
2018
Director
Melissa Haizlip
Genre
Pick one or multiple movie genres.
Documentary
Description
The documentary “Mr. SOUL!” is about social activist Ellis Haizlip, perhaps best known for his public television program highlighting social leaders, and celebrating black culture. Openly gay in a time period where his community frowned upon such a thing, he remained a stern political influence.
Where you watch
Downloads and Streams

Is Mr. SOUL! available as a pirated stream or pirated download?
No, not yet.

When will Mr. SOUL! officially be available?
As of now, there's no release data announced. This includes official services such as iTunes, Disney+, Blu-Ray or DVD release.