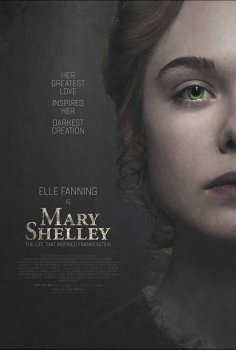 Title
Confirmed and upcoming movie titles only! Search before adding to avoid dupes.
Mary Shelley
Year
The year the movie is set to be released.
2017
Director
Haifaa al-Mansour
Genre
Pick one or multiple movie genres.
Romance
Description
Mary Shelley is a luscious-looking spectacle, drenched in the colors and visceral sensations of nature, the sensuality of young lovers, the passionate disappointment of loss and betrayal. But above all it is a film about ideas that breaks out of the well-worn mold of period drama (partly, anyway) by reaching deeply into the mind of the extraordinary woman who wrote the Gothic evergreen Frankenstein; or, The Modern Prometheus when she was 18. Making Mary into a woman in control of her life and choices rather than a victim of cruel and insensitive men, director Haifaa Al Mansour shows how the struggles of her youth swiftly matured her understanding of women's place in the world. It is the point where the film has the most chance of connecting with audiences open to the message.

Directed by groundbreaking Saudi Arabian filmmaker Haifaa Al-Mansour, Mary Shelley details the author’s relationship with the poet Percy Shelley and the events that eventually lead to her writing her seminal novel. It’s a beautifully shot film exploring a truly fascinating story, but Mary Shelley never really becomes as moving or as captivating as it should be. It’s a shallow look at an incredible life, and it will ultimately leave audiences searching for a more emotional and resonant recounting of the author’s story.

The film breezes through fights, poetically-charged reconciliations, and Mary’s well grounded suspicions that Shelley and Claire are becoming an item. The couple loses a child shortly after birth, and Claire soon thereafter winds up pregnant by the mad, bad, and dangerous to know poet Lord Byron (played by a scenery-chewing Tom Sturridge as some combination of debauched ‘70s rock star and telenovela villain). This occasions a trip to Byron’s estate in Geneva, where amid marathon drinking sessions Byron makes his famous rainy-night challenge to his guests to each write a ghost story. Drawing on her feelings of abandonment and general disgust with the men in her life, Mary gives birth to Frankenstein’s monster. It’s here, and in Mary’s subsquent struggle to get the novel published with proper credit, that the film finally finds its center.

There are some annoying historical anomalies in the dialogue (“I have no problem with that,” “I’m waiting to reach out,” “We’ll meet amazing people”), but they are glitches; most of the film’s lines ring truer to the period. As horns lock between Mary and the increasingly dissolute Percy, she comes to a sober realization of the cruelty of men and the conseqences of her mistakes. Yet still she can look him in the eye and say, “My choices made me who I am. I regret nothing.”
Where you watch
Downloads and Streams