Mary and the Witch's Flower

Juanco   September 02, 2017
Add to list
Receive an email once the selected quality (or above) has been reported 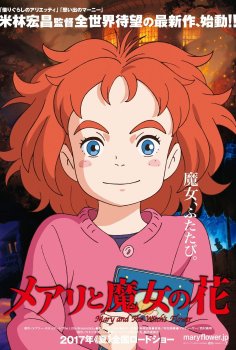 Title
Confirmed and upcoming movie titles only! Search before adding to avoid dupes.
Mary and the Witch's Flower
Year
The year the movie is set to be released.
2017
Director
Hiromasa Yonebayashi
Genre
Pick one or multiple movie genres.
Description
When Studio Ghibli shuttered their production in 2014, the film industry lost one of the foremost leaders in imaginative fantasy storytelling. With Hayao Miyazaki set to come out of retirement for a new Ghibli film, that loss is a temporary one, but lucky for fans of the animation studio we don’t even have to wait that long for a new film in the proud Ghibli tradition. Ghibli producer Yoshiaki Nishimura branched off to form Studio Ponoc with a team of key fellow Ghibli vets and their first feature, Mary and the Witch’s Flower is an absolutely enchanting animated adventure with some distinctly recognizable DNA.

The screenplay was written by Riko Sakaguchi in collaboration with Yonebayashi, and based on the 1971 novel by Mary Stewart, The Little Broomstick. The English screenplay adaptation was written by David Freedman and Lynda Freedman, with the English version produced by Geoffrey Wexler and executive produced by Will Clarke.
Mary is a young girl who has moved in with her aunt ahead of a new school year. With a week to go before classes start, no friends, and no TV, she’s crazy bored. So one day she wanders into the woods, finds a special flower, and her life is changed forever. As the title gives away, it’s a witch’s flower and it reveals that above the clouds is a wonderful world of magic.

This, yes, sounds a little like Harry Potter. And yes, there’s also a magic school. But Mary is an outsider and isn’t supposed to be in this world. So that’s pretty much where the comparisons end. Director Hiromasa Yonebayashi made a name for himself with films at Studio Ghibli so the visuals are much more comparable to the work of Hayao Miyazaki than anything else. The movie may look bold and weird, but Mary’s story is such a sprawling adventure, the juxtaposition of the two keeps the whole movie fresh. Just when you think it’s going one way, it goes another, and that only adds to the whimsical feeling that pervades throughout the movie.

Ultimately, the film may not have the profound resonance of Miyazaki’s best works, but it’s a proud debut for Studio Ponoc, another enchanting notch on Yonebayashi’s directorial belt, and a fine successor to the legacy of Studio Ghibli. I must admit, Mary and the Witch’s Flower feels like a film made special for my interests — witchcraft, sassy cats, redhead magic, and a well-meaning screw up in the lead — but even if you’re not interested in those oddly specific elements, it’s a family-friendly adventure with universal appeal. There’s just nothing not to like about it. Few films conjure the pure feeling of otherworldly awe and imaginative spirit quite like the Ghibli films, but Mary and the Witch’s Flower is an utterly bewitching delight.

Look for a limited theatrical release in late 2017 as an Academy Award-qualifying run. GKIDS has been extremely successful in getting Oscar nominations for its releases, including The Secret of Kells, Song of the Sea, and various Ghibli titles. A home video release is likely for 2018.
Where you watch
Downloads and Streams