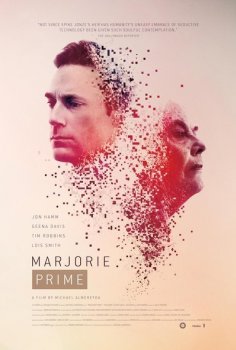 Title
Confirmed and upcoming movie titles only! Search before adding to avoid dupes.
Marjorie Prime
Year
The year the movie is set to be released.
2017
Director
Michael Almereyda
Genre
Pick one or multiple movie genres.
Cinema release
First cinema release date in any country.
October 19, 2017
Description
Adapted from Jordan Harrison’s well-received 2015 off-Broadway play of the same name by director Michael Almereyda, the micro-budget, special effects-resistant science fiction film Marjorie Prime is very much a chamber piece with flashes of cinematic brilliance. Almereyda leans in to the dialogue-heavy nature of this tone poem on loss, remembrance, and the loss of remembrance. He’s also assembled a cast that commands attention. Lois Smith is remarkable as octogenarian Marjorie, a woman in failing health whose son-in-law, Jon (Tim Robbins), has purchased a holographic companion for her. Fed enough information, this projection will eventually learn to respond as if it was a specific person—and for Marjorie, that means he appears as the younger version of her late husband, Walter.

Film Rise plans a mid-2017 theatrical release and an awards-season push (we might be looking for a DVDSCR torrent this Christmas) for its 86-year-old star Smith, whose credits go as far back as Elia Kazan’s 1955 classic East Of Eden.

The first scene of Michael Almereyda’s graceful, enthralling chamber drama “Marjorie Prime” takes place in the well-appointed living room of a Long Island beach house. The sounds of waves outside are heard throughout. A woman in her mid-80s and a handsome man who appears to be in his 40s sit across a table and talk for a good while. If you came in not knowing the film was adapted from a play, you might guess it here.

Set in the near future, Marjorie Prime centers on Smith’s Marjorie, who spends time with the young likeness of her deceased husband Walter (Hamm). This revitalized Walter is a sophisticated holographic projection that provides companionship while stimulating Marjorie’s memory—allowing her to explore their shared past as she lives with dementia. Marjorie’s daughter Tess (Davis) and her husband Jon (Robbins) develop their own complex feelings about the new Walter, uneasily coming to terms with the nature of identity, memory, and our ever-shifting relationship to technology.

Things definitely get weird in the second half but not in a thriller, Ex Machina kind of way. There’s not a whole lot that happens in this movie, aside from the notion of entire lives being lived, remembered, and transformed. It’s an incredibly sad film for reasons that are difficult to express. There are no heroes or villains, just actors playing different versions of the same character through various prisms. Naturally, Lois Smith has been getting a lot of attention for her performance; she is 86 years old, after all, and is the only one here to have originated the role onstage. But I can’t say enough about how tender Geena Davis is in her contemplative moments. And Jon Hamm, also an executive producer, continues to make extraordinary choices (like me, everyone should have loved him in Baby Driver) in his post-Mad Men moment.
Where you watch
Downloads and Streams