Life and Nothing More

Bannister   September 23, 2017
Add to list
Receive an email once the selected quality (or above) has been reported 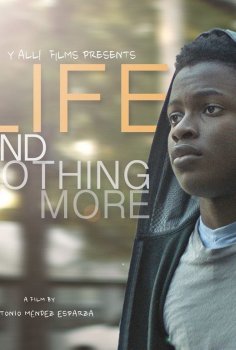 Title
Confirmed and upcoming movie titles only! Search before adding to avoid dupes.
Life and Nothing More
Year
The year the movie is set to be released.
2018
Director
Antonio Ménedez Esparaza
Genre
Pick one or multiple movie genres.
Independent
Description
Life & Nothing More is a fiction feature that shows the reality of a single mother, Regina, who lives in the north of the state of Florida with her two children, in a context of social inequality, trying to reach the end of the month time that fights against the routine and the difficulties of the day to day.

There are a few good ideas for a movie in Antonio Ménedez Esparaza’s second feature film, Life and nothing more. Unfortunately, it feels like Antonio couldn’t commit to one of those ideas and, as a result, the film and the kernels of good ideas all suffer.

As the movie begins it seems like a great story to follow would is that of Andrew (Andrew Bleechington) discovering who he wants to be in the world as a black teenager without a father figure or direction in life. Later the film proposes that the real story should be about why Regina (Regina Williams) can’t get ahead with work or in her new relationship with Robert (Robert Williams) because of her troubled son, Andrew. Then, far too late in the film, it’s made clear that it would have been good to see a movie about Regina crusading against Miami PD and some locals to get justice for her son, Andrew. Even though these elements are introduced, they don’t have time to develop and create a strong core for the overall movie.

Esparza has done terrific work with his cast of non-pros, and several exchanges — particularly those between Regina and Robert — drip with an engaging realism that can only have been the result of guided improvisation. One particular moment, when Regina asks Robert why he hasn't asked whether she has kids, is beautifully observed, shot and played; indeed, the whole emotional cat-and-mouse sequence between the pair is bravura work from all concerned.

There's the real sense that the viewer is privy to scenes of a private family life unfolding. But stylistically Esparza and D.P. Barbu Balasoiu have entirely foregone the clichéd hand-held camera so beloved of intimate dramas like this, opting instead for elegant, unobtrusive still shots, often from the middle distance across framing spaces, which seem to keep us at a respectful distance from events and which invite contemplation rather than involvement.

The Playlist has posted a trailer to ‘Life And Nothing More,’ which will have its World Premiere at the 2017 Toronto International Film Festival.

According to the site, the film, directed by Antonio Mendez Esparza (“Aquí y allá“), was shot using mostly non-professional actors across two-and-a-half years, and it follows a young African American family as they battle the realities of race, the legal system and social inequality against the backdrop of the U.S. election. Before they can face the future, the family must reckon with their past.

That life is harder for some than for others is a tale told too often, but it's always worth repeating, especially when done with the craft show here. The phrase “it’s just what it is” is repeated a couple of times, like a motto, and perhaps in the end, Life and Nothing More is about the obligatory resignation to circumstance, the inability to dream, which is so much a part of its characters’ lives. This is why its quietly optimistic final scene, earned by Regina, is, for all its slow staginess, so moving.
Where you watch
Downloads and Streams

Is there a Life and Nothing More torrent or stream available?
No, not yet.

When will Life and Nothing More officially be available?
As of now, there's no release date announced. This includes official services such as iTunes, Disney+, Blu-Ray or DVD release.