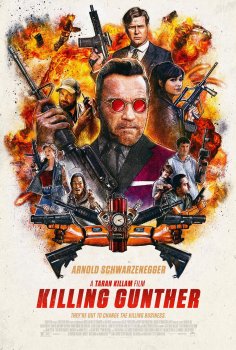 Title
Confirmed and upcoming movie titles only! Search before adding to avoid dupes.
Killing Gunther
Year
The year the movie is set to be released.
2017
Director
Taran Killam
Genre
Pick one or multiple movie genres.
Cinema release
First cinema release date in any country.
October 20, 2017
Description
The latest project from Taran Killam since leaving 'Saturday Night Live' is the action comedy movie "Killing Gunther". His feature film debut as a director will be released on October 20th, 2017, starring Arnold Schwarzenegger, alongside Killam himself, his wife Cobie Smulders, and 'SNL' castmate Bobby Moynihan.
Where you watch
Downloads and Streams