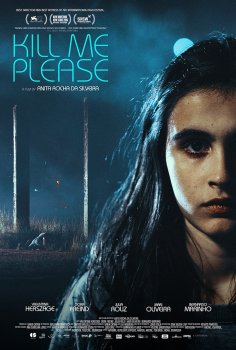 Title
Confirmed and upcoming movie titles only! Search before adding to avoid dupes.
Kill Me Please
Year
The year the movie is set to be released.
2017
Director
Anita Rocha da Silveira
Genre
Pick one or multiple movie genres.
Cinema release
First cinema release date in any country.
September 01, 2017
Description
The debut feature film from Anita Rocha da Silveira, the thriller "Kill Me Please", was a festival favorite in 2015 but struggled to find distribution. Valentina Herszage stars as a young girl whose hometown is plagued by crime and death, it received a limited theatrical release on September 1st, 2017.
Where you watch
Downloads and Streams

Is there a Kill Me Please torrent or stream available?
No, not yet.

When will Kill Me Please officially be available?
As of now, there's no release date announced. This includes official services such as iTunes, Disney+, Blu-Ray or DVD release.