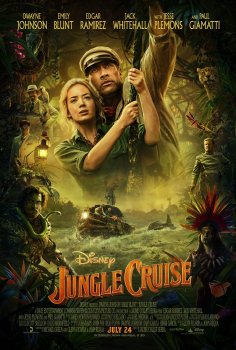 Title
Confirmed and upcoming movie titles only! Search before adding to avoid dupes.
Jungle Cruise
Year
The year the movie is set to be released.
2021
Director
Jaume Collet-Serra
Genre
Pick one or multiple movie genres.
Cinema release
First cinema release date in any country.
July 30, 2021
Digital release
Official digital release date on services such as iTunes, Amazon, Netflix. It's the first known release date, without any country restriction. So if it's out on iTunes Russia first, this would be the digital release date.
July 30, 2021
Description
Jungle Cruise is an upcoming Disney film based on a theme park attraction. Dwayne “The Rock” Johnson stars as Frank, a charismatic tour guide who owns a failing jungle cruise. Meanwhile Emily Blunt is Lily, an ambitious scientist-explorer who is hunting for a rare healing flower in the Amazon. When Lily meets Frank for passage, both embark on an unforgettable journey.

Jungle Cruise looks like a combination of Pirates of the Caribbean and The Mummy. In terms of fun, this is an amazing combo, and both The Rock and Emily Blunt have the charisma to carry it all the way. The trailer shows off fearsome animals, action-packed fights, and the spooky jungle adventures. There is some park-themed, niche humor as well. Other cast members of Jungle Cruise include Paul Giamatti, Jesse Plemons, Jack Whitehall, Édgar Ramírez, Andy Nyman, and Quim Gutiérrez. This film will be available simultaneously in the theatres and on Disney+.
Where you watch
Downloads and Streams

Is Jungle Cruise available online?
No. It has yet to be reported as either a pirated torrent or pirated stream.

When will Jungle Cruise officially be available?
It's set for a July 30, 2021 release. Illegal downloads, torrents and streams will be reported on this page. Its official release through streaming services, such as Netflix, will also be reported.