Mr. Meeseeks   February 02, 2018
Add to list
Receive an email once the selected quality (or above) has been reported 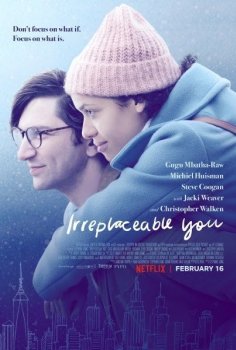 Title
Confirmed and upcoming movie titles only! Search before adding to avoid dupes.
Irreplaceable You
Year
The year the movie is set to be released.
2018
Director
Stephanie Laing
Genre
Pick one or multiple movie genres.
Cinema release
First cinema release date in any country.
February 16, 2018
Description
“Irreplaceable You” is the directorial debut of Emmy award-winning producer Stephanie Laing, which will premiere on Netflix later this month. Gugu Mbatha-Raw, and Michiel Huisman star as soulmates whose lives are changed forever when one is diagnosed with cancer, with little hope of surviving. The supporting cast features Claire Holt, Christopher Walken, Steve Coogan, Timothy Simons, and Jacki Weaver.
Where you watch
Downloads and Streams