Mr. Meeseeks   February 09, 2020
Add to list
Receive an email once the selected quality (or above) has been reported 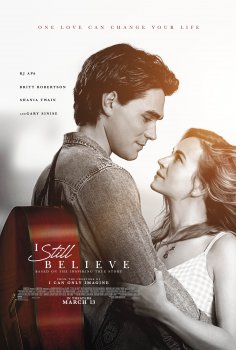 Title
Confirmed and upcoming movie titles only! Search before adding to avoid dupes.
I Still Believe
Year
The year the movie is set to be released.
2020
Director
The Erwin Brothers
Genre
Pick one or multiple movie genres.
Romance
Cinema release
First cinema release date in any country.
March 12, 2020
Description
Based on the life story of musician Jeremy Camp, directed by Jon Erwin and Andrew Erwin. While some say it's "what America needs right now", consensus is that this VOD-friendly film is pretty much trash. It's out and due for a Netflix streaming release.
Where you watch
Downloads and Streams

Is I Still Believe available as a pirated stream or pirated download?
No, not yet.

When will I Still Believe officially be available?
As of now, there's no release data announced. This includes official services such as iTunes, Disney+, Blu-Ray or DVD release.