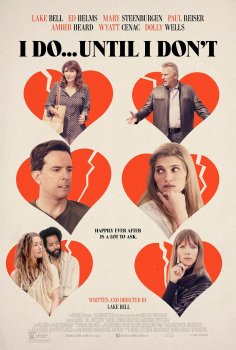 Title
Confirmed and upcoming movie titles only! Search before adding to avoid dupes.
I Do...Until I Don't
Year
The year the movie is set to be released.
2017
Director
Lake Bell
Genre
Pick one or multiple movie genres.
Cinema release
First cinema release date in any country.
September 01, 2017
Description
The second feature film directed/written by Lake Bell, "I Do....Until I Don't", stars herself alongside Ed Helms. Supporting roles in the film are portrayed by Mary Steenburgen, Paul Reiser, Amber Heard, Wyatt Cenac, and Dolly Wells
Where you watch
Downloads and Streams