Mr. Meeseeks   January 10, 2018
Add to list
Receive an email once the selected quality (or above) has been reported 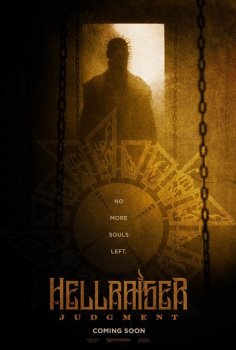 Title
Confirmed and upcoming movie titles only! Search before adding to avoid dupes.
Hellraiser: Judgment
Year
The year the movie is set to be released.
2018
Director
Gary J. Tunnicliffe
Genre
Pick one or multiple movie genres.
Cinema release
First cinema release date in any country.
February 13, 2018
Description
It’s been over six years since we last saw a ‘Hellraiser’ film get released, but in one months time a tenth installment will hit digital retailers around the globe. Written and directed by Gary J. Tunnicliffe, who has been part of the franchise since the second sequel, starting out as a makeup special effects artist. The cast features Damon Carney, Randy Wayne, Alexandra Harris, Heather Langenkamp, and Paul T. Taylor.
Where you watch
Downloads and Streams