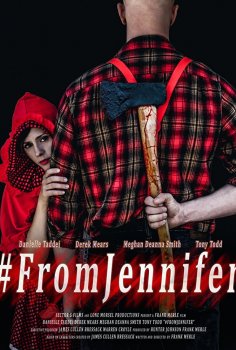 Title
Confirmed and upcoming movie titles only! Search before adding to avoid dupes.
#FromJennifer
Year
The year the movie is set to be released.
2017
Director
Frank Merle
Genre
Pick one or multiple movie genres.
Cinema release
First cinema release date in any country.
September 26, 2017
Description
The found-footage horror-comedy film "#FromJennifer" from American director Frank Merle is already receiving rave reviews from critics. The story was inspired by (but is not connected to) the film "To Jennifer", telling the story of an actress who decides to get even with her ex-boyfriend by starting a violent "Revenge Porn Revenge" website. Jennifer is played by Danielle Taddei, and the supporting cast includes Tony Todd, Derek Mears, and Aaron Abrams.
Where you watch
Downloads and Streams

Is there a #FromJennifer torrent or stream available?
No, not yet.

When will #FromJennifer officially be available?
As of now, there's no release date announced. This includes official services such as iTunes, Disney+, Blu-Ray or DVD release.