Mojib   September 30, 2017
Add to list
Receive an email once the selected quality (or above) has been reported 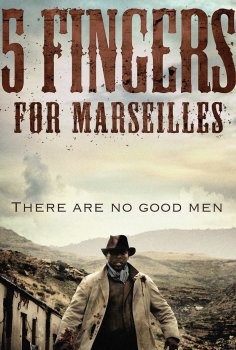 Title
Confirmed and upcoming movie titles only! Search before adding to avoid dupes.
Five Fingers For Marseilles
Year
The year the movie is set to be released.
2017
Director
Michael Matthews
Genre
Pick one or multiple movie genres.
Description
Five Fingers for Marseilles (Menoana e Mehlano ea Marseilles) is a western set in the rural town of Marseilles in South Africa’s Eastern Cape Province. The film stars an all-South African cast and is one of four South African films debuting at the Toronto International Film Festival (TIFF) this September. Its official trailer, released on Aug. 23, depicts scenes familiar to fans of the western: Long stretches of mountains, a remote town, glimpses of a mysterious lone ranger, and the sound of wind beating dust against the streets.

The Western-style thriller dives deep into the sociopolitical sphere of South Africa, and is the culmination of eight year spent taking the film from concept to screen, including a 5,000-mile research trip around South Africa. The film has also been selected for Fantastic Fest, BFI London and the Busan International Film Festival. Download or stream for VOD has yet to be confirmed.

The film begins with a group of kids called the Five Fingers, who frequently challenge their town’s brutal and oppressive apartheid-era police force, according to the film’s synopsis. During a showdown with the police, one member of the group, Tau, kills two policemen and flees the town to escape the authorities. He is eventually arrested and sent to prison in Johannesburg.

There is a connection between Tau and Lerato, who have shared a kinship since they were children. There isn’t a love story between these two per se, but if things were different in both of their lives, it’s likely these two would be married with a family. Each of these characters is seeking one thing with the exception of the antagonists and that is peace within the community. Tau becomes the King of his people in the metaphorical sense when he fights to protect what is left of the town that has been corrupted by vigilantes and has scared the townspeople into losing all hope of what is left to be salvaged. Tau inevitably carries the weight of his duties and responsibilities to not only his people but to himself.

This are fairly archetypal characters, to be sure, and there are great archetypal scenes, such as meeting the 'black hat' bad cowboy in the local tavern, trying to steal away the local prostitutes and throwing his weight around, especially with Tau, the Lion, the 'Ghost' 'white hat' cowboy who appears out of nowhere. But instead of rushing through to the beatings and guns, we’re allowed to feel the full weight of the situation and its deeper meaning, and see how the wild south will remain wild as long as institutions of corruption have yet to be dismantled.
While not completely without hope, Five Fingers for Marseillesdoes not attempt to gloss over the violence of the situation (not entirely fictitious), nor does steer clear or a harsh look at those people and institutions that turn a blind eye to these problems. Wrap this in the iconography of the western, and you get a distinctly South African syntax of how these images can be reinvigorated in a new form.
Where you watch
Downloads and Streams

3 thoughts on “Five Fingers For Marseilles”