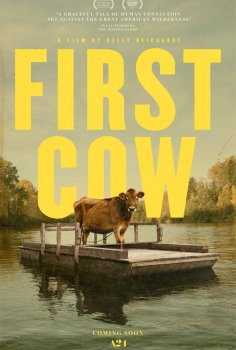 Title
Confirmed and upcoming movie titles only! Search before adding to avoid dupes.
First Cow
Year
The year the movie is set to be released.
2020
Director
Kelly Reichardt
Genre
Pick one or multiple movie genres.
Drama
Cinema release
First cinema release date in any country.
March 06, 2020
Description
Directed by Kelly Reichardt, First Cow is an upcoming drama film that tells the story of King-Lu and Cookie Figowitz’s growing friendship in the beautiful Northwest landscape and their clever scheme that involves the first cow in the area.

After Cookie finds hungry and naked King-Lu in the woods, they start a friendship that results in their ultimate downfall. After playing house and steal from the rich and trying to form life in the wasteland for a while, they start a bakery before attempting to test their luck in San Francisco in 1820.

First Cow is a unique cinematic event and Reichardt takes a simple story about boys fighting about fur and milk and transforms it into a touching, beautiful tale. The movie touches on everything that anyone would expect from one of Reichardt’s films.

Is First Cow available as a pirated stream or pirated download?
No, not yet.

When will First Cow officially be available?
As of now, there's no release data announced. This includes official services such as iTunes, Disney+, Blu-Ray or DVD release.