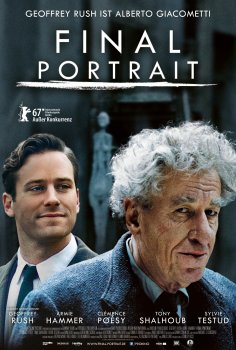 Title
Confirmed and upcoming movie titles only! Search before adding to avoid dupes.
Final Portrait
Year
The year the movie is set to be released.
2017
Director
Stanley Tucci
Genre
Pick one or multiple movie genres.
Cinema release
First cinema release date in any country.
August 18, 2017
Description
“Final Portrait” is the true story of one of the last masterpieces painted by Alberto Giacometti, and the man who modeled for it an old friend James Lord. Stanley Tucci directs this film which stars Geoffrey Rush and Armie Hammer. It will hit theaters in the United Kingdom in August, and features supporting roles from Tony Shalhoub, Clémence Poésy, James Faulkner, and Sylvie Testud.
Where you watch
Downloads and Streams