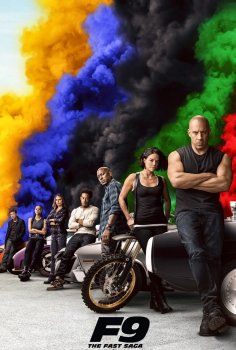 Title
Confirmed and upcoming movie titles only! Search before adding to avoid dupes.
Fast & Furious 9 (F9)
Year
The year the movie is set to be released.
2021
Director
Justin Lin
Genre
Pick one or multiple movie genres.
Cinema release
First cinema release date in any country.
June 25, 2021
Description
The Fast & Furious franchise is making its comeback this year with F9, and fans simply cannot wait for it. Fast & Furious 9 is directed by Justin Lin, who will also direct one more installment after this.

At this point, very little is known about the film. Virtually everything related to the plot is currently under wraps. The Fast & Furious franchise has gone global with films that are shot in several locations e.g. Iceland, Abu Dhabi, and Rio de Janeiro. It seems this has continued in the ninth installment. According to the director’s tweet, the movie has been shot in Los Angeles, Thailand, Georgia, Edinburgh and London.

The movie will feature returning cast members including Vin Diesel, Nathalie Emmanuel, Ludacris, Tyrese Gibson, Michelle Rodriguez, Charlize Theron, and Jordana Brewster. It will also include newcomers like Cardi B, Vinnie Bennett, Michael Rooker, and John Cena. F9 will hit theaters on May 22, 2020. Expect a pirated version around that time, with a home release in August. (Due to the Coronavirus pandemic, the film has been delayed until June 2021)
Where you watch
Downloads and Streams

Is there a Fast & Furious 9 (F9) torrent or stream available?
No, not yet.

When will Fast & Furious 9 (F9) officially be available?
As of now, there's no release date announced. This includes official services such as iTunes, Disney+, Blu-Ray or DVD release.