Mojib   March 23, 2020
Add to list
Receive an email once the selected quality (or above) has been reported 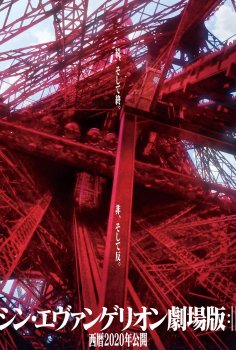 Title
Confirmed and upcoming movie titles only! Search before adding to avoid dupes.
Evangelion: 3.0+1.0
Year
The year the movie is set to be released.
2020
Director
Hideaki Anno
Genre
Pick one or multiple movie genres.
Cinema release
First cinema release date in any country.
June 27, 2020
Description
The rebuild of Evangelion, or simply Evangelion 4, as it's the fourth movie in the Rebuild of Evangelion series. The movie has been delayed for years, due to Hideaki Anno facing depression. While there's a Japanese cinema release set in June, the US, english dubbed version won't likely hit VOD or cinemas this year.

Studio Khara and director Hideaki Anno return to make the what might possibly be the last movie in the series.We don’t know what the movie will be about except that it will be a direct sequel to the previous movie in the series,also possibly exploring the friendship between Ikari and Nagisa.

For those not in the know, the film stems from the Neon Genesis Evangelion series, which celebrates its 25th year birthday this year.
Where you watch
Downloads and Streams

Is Evangelion: 3.0+1.0 available as a pirated stream or pirated download?
No, not yet.

When will Evangelion: 3.0+1.0 officially be available?
As of now, there's no release data announced. This includes official services such as iTunes, Disney+, Blu-Ray or DVD release.