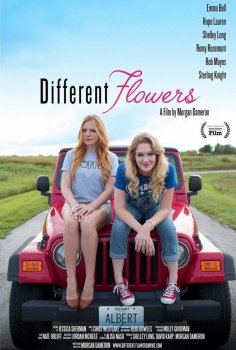 Title
Confirmed and upcoming movie titles only! Search before adding to avoid dupes.
Different Flowers
Year
The year the movie is set to be released.
2017
Director
Morgan Dameron
Genre
Pick one or multiple movie genres.
Description
Shelley Long returns to the big screen in feature debut from Morgan Dameron. Different Flowers is a girl-powered ode to the Heartland. Now Playing In Select Theaters! With its relaxed Midwestern charm and female-empowerment storyline, Morgan Dameron’s wedding-themed family dramedy should have no trouble finding a suitable suitor prepared for a committed partnership. Premiered early 2017, but as of now has yet to be released as a download.

Approaching 30 and facing crucial decisions about career, marriage and family, Millie (Emma Bell) makes a last-second decision to bail on her lavender-themed Kansas City wedding, leaving her groom Charlie (Sterling Knight) awkwardly standing at the altar. Abetted by her enabling younger sister Emma (Hope Lauren), the pair makes a beeline for their grandmother’s farmhouse in rural Missouri to wait for the self-inflicted disaster to dissipate a bit. Left to their own devices and installed in their childhood bedroom, the two revert to their juvenile behavior patterns of sisterly bonding and passive-aggressive conflict.

First-time feature writer-director Morgan Dameron attempts to craft a love letter to her native heartland and to sisterhood, but falls short on both fronts, rarely digging beneath the surface of small-town bonhomie and what makes Millie and Emma tick.
Most importantly, why Millie waits until zero hour to jilt her dutiful groom is inadequately and unconvincingly handled.

Dameron, a former assistant to J.J. Abrams at production company Bad Robot, has taken note of her mentor’s skillful touch with emotionally loaded material in crafting her two lead characters. Although temperamentally they appear to be opposites, with older Millie behaving more maturely than her impulsive sister, naturally they’re more alike than different. Their divergent perspectives on handling Millie’s breakup provide much of the humor, however, as Emma’s more libertine approach forces Millie to lighten up and consider the brand-new options for her future.

These characterizations are stronger than some of Dameron’s plotting, which too often relies more on coincidence than reasonable motivation. In particular, Millie’s sudden aversion to marriage and loss of faith in Charlie remain largely unexplained and similarly, habitual flirt Emma’s instant attraction to Blake doesn’t seem to require any reasonable justification other than the need to create conflict between the two women.

In her directing and screenwriting debut, Ms. Dameron steps far away from the “Star Wars” universe, where she worked as an assistant to J.J. Abrams and lent her surname to the character Oscar Isaac plays in “The Force Awakens.” For her Midwestern-set story, Ms. Dameron uses direct shots to give the cinematography a plain-spoken feel. Several scenes have a warm, rosy tinge to them, even during the sisters’ meanest blowups, as if to assure the audience that, for these two, there will always be reconciliation.
Production values are adequate for the pic's clearly constrained budget, and Dameron makes the most of limited locations and the small cast by providing rural Missouri landscapes as a diverting backdrop to much of the action taking place on the road in Emma’s beat-up red Jeep.
Where you watch
Downloads and Streams