Mavoy   April 12, 2019
Add to list
Receive an email once the selected quality (or above) has been reported 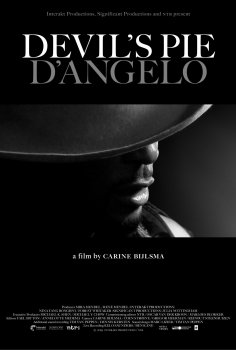 Title
Confirmed and upcoming movie titles only! Search before adding to avoid dupes.
Devil's Pie - D'Angelo
Year
The year the movie is set to be released.
2019
Director
Carine Bijlsma
Genre
Pick one or multiple movie genres.
Documentary
Description
Carine Bijlsma's documentary will put a spotlight on neo-soul superstar, Grammy-awarded artist, D'Angelo. The film traces his career and personal life, from his 90s breakthrough to 14 year absence from the public eye. It will also include footage from singer's comeback tour. D'Angelo's friends and collaborators - including Questlove and Dave Chapelle - appear in the film. The documentary will have its world premiere at Tribeca Film Festival.
Where you watch
Downloads and Streams

Is there a Devil's Pie - D'Angelo torrent or stream available?
No, not yet.

When will Devil's Pie - D'Angelo officially be available?
As of now, there's no release date announced. This includes official services such as iTunes, Disney+, Blu-Ray or DVD release.