Death on the Nile

Mr. Meeseeks   February 13, 2018
Add to list
Receive an email once the selected quality (or above) has been reported 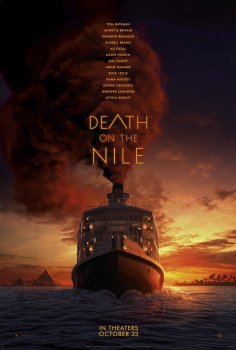 Title
Confirmed and upcoming movie titles only! Search before adding to avoid dupes.
Death on the Nile
Year
The year the movie is set to be released.
2019
Director
Kenneth Branagh
Genre
Pick one or multiple movie genres.
Cinema release
First cinema release date in any country.
October 09, 2020
Description
20th Century Studios has scheduled a sequel to their 2017 hit “Murder on the Orient Express” to be released in 2020. Michael Green is adapting the screenplay from the Agatha Christie novel “Death on the Nile”, with Kenneth Branagh returning in the lead role.

Detective Poirot returns and this time, he is turning his attention toward a murder mystery set on a cruise up the Nile river. In Death on the Nile, detective Hercule Poirot is enjoying a luxurious cruise down Egyptian river when a love triangle spills into murder. Poirot must identify the killer before the ship arrives at its destination and more lives are claimed.

Death on the Nile was first adapted to big screen in 1978 and that film had a star-studded cast. Whether the new adaptation featuring Kenneth Branagh as Poirot can top the previous one remains to be seen, however the new version is also full of some amazing cast members i.e. Gal Gadot, Jennifer Saunders, Dawn French, Russel Brand, Letitia Wright, Armie Hammer, and Annette Benning. Death on the Nile will hit theaters on October 23, 2020.
Where you watch
Downloads and Streams

Is there a Death on the Nile torrent or stream available?
No, not yet.

When will Death on the Nile officially be available?
As of now, there's no release date announced. This includes official services such as iTunes, Disney+, Blu-Ray or DVD release.