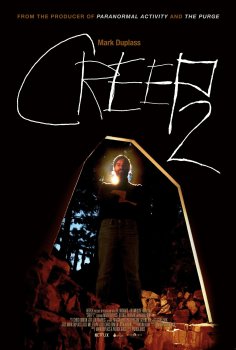 Title
Confirmed and upcoming movie titles only! Search before adding to avoid dupes.
Creep 2
Year
The year the movie is set to be released.
2017
Director
Patrick Brice
Genre
Pick one or multiple movie genres.
Cinema release
First cinema release date in any country.
October 24, 2017
Description
Patrick Brice's low-budget found footage horror film "Creep" became a huge hit through Netflix after it was released, and a new one is planned for the end of October 2017. Brice will be returning to direct, Mark Duplass will be reprising the lead role from the last film, and Brice & Duplass co-wrote the film together.
Where you watch
Downloads and Streams

Is there a Creep 2 torrent? Yes. Reports are available below.
When will Creep 2 be available on digital platforms like iTunes, Amazon or Apple+? As of now, there's no release date announced. This includes iTunes, Amazon, Blu-Ray and DVD.